The comedy as a literary genre has always enjoyed a great acceptance in the literature and art due to its public welcome. The concept of comedy and all kinds of techniques relevant to its creation in literature, especially the literature of children and young adults, has been the topic of discussion for several times. One of the great thinkers of this era is Ivan Fonagy (1920-2005), a prominent Hungarian linguist and a psychologist whose ideas in the satire (comedy) field is of great importance due to its distinct and scientific division- which is new in many cases- as well as the all-inclusiveness of this theory, which can be used as a proper and comprehensive criterion in the study of satire in fiction, particularly the literature of children and the young adults. According to Fonagy's theory, satire in the literature of children and young adults includes thirteen components. He himself has repeatedly exploited these components in the examination of some of the world's well-known comic stories of children and adolescents. There is still no independent work on Farhad Hassanzadeh's stories (2002); however, there are two articles regarding the study of comedy in these stories: “Appearance of comedy techniques in the plot structure of stories by Farhad Hassanzadeh written by Safaee and Adhami (2014)” and also “Satire and comic styles in the stories of children and young adults of Farhad Hassanzadeh written by Khodabin et al. (2016).” The writers have mentioned some techniques and cases of the creation of satire in three sets of stories by Hassanzadeh and have provided examples for each. In the present study, the satirical techniques in the works of Hasanzadeh have been identified and investigated using the thirteen criteria of the Fonagy’s theory.

The library research method has been used in this study in which the data were analyzed by the descriptive-analytic method using qualitative method. In other words, all the data and information contained in the books of Farhad Hassanzadeh were collected and analyzed by the library method. In this process, necessary information is extracted based on sources including articles, books, and sometimes academic papers using multiple scanning and notes. The theoretical framework of the study is based on Fonagy’s theory. Therefore, first, the thirteen indices of the Fonagy’s theory as well as his other ideas in the field of satire were extracted in order to analyze the comic texts, and then Farhad Hassanzadeh's books were analyzed based on this theory. In a general classification, Fonagy (2001) divides the satire in fiction of children into two main types of deviation from the standard and language games, while considering some components and examples for each. In the current research, taking Fonagy’s views and his classification of satirical methods in the child fiction literature into account, Hassanzadeh's (2004) stories in the field of literature of children and young adults have been criticized and analyzed. The works by Hassanzadeh (2007) which are examined in this paper include Hamshagerdi ceiling newspaper, Volume I (1999) and Volume II (2000), A Melody for Wednesdays (1998), Watermelon with love (1999), Bounced humors (2002), The Pot-headed Monster (2010), and two sets of stories At a time when Thursday and Friday were not yet invented, and A Happy Family’s Grins, as well as comic novels of Hasti (2010) and The Scorpions on the Bambek Ship (2009).

In a general view, Fonagy has divided comedy in the fiction literature of the children into two types: deviation from the standard and language games,  each of which has instances (Fonagy, 2001, 2002, 1996, 1989).

Deviation from the standard

Fonagy considers the domain of deviation from the standard including instances of short connection, ambiguity in superstructure, strangeness of imagery forms, destruction of speculation, vitalization, and grotesque events, as he believes that a writer who is able to use all or some of these elements skillfully and elegantly, can create humor in the fiction literature of children, with enjoyment lasting for many years in the mind of the child and even the adult (Fonagy, 1998, p.109).
In the meantime, the final sentence of Fonagy is entirely realized in the writing style of Hassanzadeh (2000). Hassanzadeh is one of the writers in the area of children who has been able to attract adult audiences by creating a special style of writing and satire (2002). In all his comic stories, Hassanzadeh (2010) has a strange skill in the creation of a deviation from the standard through all kinds of examples. The deviation from the standard means that the writer performs manipulations in his narration with elegance and skill. This manipulation can involve changing the angle of view and the narration in such a way that the writer enters into a dialogue with the reader or the characters of the story. In other words, he  creates a Metanarrative or a short connection, or uses the images and imagery forms with a high degree of prominence and astonishment for the reader in his narration, or elegantly prevents guessing by the audience (Fonagy, 1998, p.  86).
Examples of deviations from the standard are as follows:

Short connection: is a kind of angle of view that is the dominant method of narration in the postmodern stories. In this approach, the writer temporarily enters into the story and talks with the heroes and characters of the story or with the readers, and even in the more intense state, also changes the fate of the main characters of the story (Payandeh, 2014, p. 149).
Strangeness of imagery forms: In the book Language in Language, he states that one of the most important characteristics of a strong and creative satirist is his creativity which is strange and pleasant for the reader (Fonagy, 2001, p. 127).
Destruction of speculation: Fonagy divides destruction of speculation into two types: 1. When narrating the story is such that the audience is completely surprised and does not expect it to end in this way (Fonagy, 2001, p. 121). 2. Another type of destruction of speculation occurs in the range of sentences and paragraphs, in which the author uses the sentence or clause in such a way that the words in their axis of association in the middle or the end of the sentence or clause, surprises the audience (Fonagy, 2001, p. 123).
Ambiguity in the superstructure of the sentence: According to Fonagy ambiguity in the sentence superstructure is achieved in two ways. 1. Sometimes, the author, in a sentence or a text, uses words or phrases at the end of the sentences that are not expected by the audience, and it has no cohesion with the axis of association of the sentencse, however this inconsistency and irrelevance makes the audience smile and enjoy (Fonagy, 2001, p. 103). Of course, it should be noted that the purpose of Fonagy from ambiguity here is the ambiguity as the lack of cohesion, astonishment, which results in surprise and not ambiguity in the grammatical sense (Smith, 2009, p. 62).
Vitalization and humanization: This is the common ground for all the satirists around the world. What is happening in humor, especially in satire, is the continuous dismemberment of the boundary between the man and animal (Cracchli, 2005, p. 50).
Grotesque: Grotesque is a kind of comedy that frightens you while making you laugh in such a way that its frightening or repelling aspect controls the laughter (Conneli, 2004, p. 396).

Language game is another effective factor in the creation of satire in children's stories which account for the following types.

Phonetic emphasis: A structure or phrase is phonetically pronounced more prominently than other structures of the sentence, but every phonetic stress does not create comics. Sometimes, a phonetic emphasis can be considered as satiric, in this case, sometimes emphasis is not required, rather it is performed for the sake of ridiculing or sneering, or to mimic someone's speech and dialect, or to portray the sound of certain events through the onomatopoeia (fonagy, 1996, p. 118).
Ambiguity in vocabulary and phrases
Pun

In the present study, according to the ideas of Fonagy (1996) regarding satire in children's fiction literature, Hassanzadeh's comedy stories in the field of children’s literature were examined. Hassanzadeh (2015) is a satirist who has well used the component of deviation from the standard and types of its examples in his works in an artistic way, and this is the most important factor in his success in the humorous stories. The writers and poets who use just language games such as puns, phonetic stress, and repetition to create satire, do not have much success in creating humor. The mere reliance on the inclusion of samples of one or two instances and the components of deviation from the standard cannot create an effective satire in the children's story. In this study, it has been found that nearly 60% of satire's styles in Hasanzadeh's stories were based on the deviation from the standard and its examples, and the author has used most instances of deviation from the criterion with almost the same rates and this factor has led to the attractiveness of his satire in his stories. 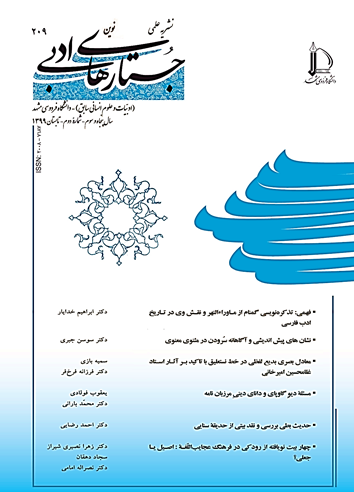